25 Years of ESN Celebrated in Utrecht 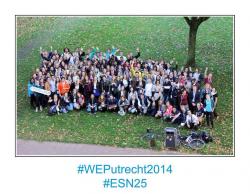 If you were ever wondering what makes the perfect recipe for a great ESN event, let me give you a few tips: some ESN countries willing to learn and share best practices, a few good people to organise a smooth interactive event that runs perfectly on time, a chance to celebrate the 25-years-anniversary of our beautiful network, with a pinch of smiles and hugs everywhere and the flavour of a gorgeous city. In a few words, this is the best description for the Western European Platform that took place between 16th and 20th October in Utrecht, the birthplace of the very first ESN section.

The first day of the event marked the exact date of the 25th anniversary, which was beautifully celebrated through the release of a new ESN promotional video - #ThisisESN. If you have not seen that yet, prepare for goose bumps, it is really something else… On the same note, Stefan Jahnke, the president of our network, gave a brilliant speech on the importance of being united and keeping on growing and continuing doing something meaningful for mobile students. The social media was also on fire, with pictures of flag parades, celebrations, ESN25 cakes, people coming together from all over Europe, and most of all the Thunderclap campaign that had a social reach of over a million people.

The actual plenaries started on Friday and were opened by a speech from Desiree Major, the first president of ESN International, who explained how 25 years ago a few sections joined together to form this once very small organisation that now developed to such a level of professionalisation and incorporates over 450 sections in 37 countries, with more than 29 000 volunteers offering their services to over 180 000 international students every year.

But what made this event stand out more than ever were the workshops and small sessions. They were especially organised to be as interactive as possible in order to get new and old ESNers involved as much as possible, to make the most out of the experience. The topics were diverse, from how to organise an international event, to project-specific workshops such as Mov’in Europe or Exchangeability, general sessions on leadership and personal development, ESN CV or how to attract trainees for your sections. But what they all had in common was a great quality of information transmitted in a stimulating, interactive way. This led to new ESNers learning quite a lot in a short period of time, but also made older members learn from the fresh ideas and the enthusiasm the sections were bringing. It was in any case a win-win situation for both sides. At the end of the day, everyone could agree that it was one of the best events they had ever attended.

As for me, it was truly inspirational to be there as both a newbie within this network, but at the same time as someone who has been lucky enough to get involved with the international side of ESN sooner than most people do and now has the chance to share the knowledge and experience accumulated this way with newer generations. These kinds of events make you realise how well this sense of community can be fostered by each and every one of us, all volunteers, “students helping students”, and how together we have the strong and loud voice that alone would not be likely to be heard.