Got your ESNcard yet? 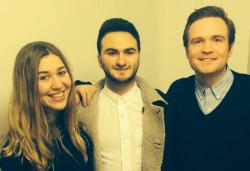 The adventure began in September 2014, during the National Platform in Southampton, when Leonid Kaptina from ESN Hertfordshire was voted in to build a team responsible with increasing the ESNcard’s value in the UK. As a result, the following months our friend Len kept busy with the preparations necessary for him to tackle and accomplish this mission. First task: find the people who would like and be suited to bring their contribution to the recently created Partnership team. After recruiting Elena Saldaña Quintans, the president of ESN Oxford Brookes, and Gerald Zeltner, a former ESN RGU committee member, the roles were divided and everyone was given responsibilities to deal with. With the supervision of the National President in time, Andreas Mathikolonis, the team started putting together their action plan for the year!

On the 12th of December 2014, the first ESN UK Partnership meeting was held in the prestigious city of Oxford at the Oxford Brookes University. Elena, who had previously traveled to the TPM (Treasure Partnership Meeting - read more about her adveture here) in Brussels, used this opportunity to inform the team about the development and growth taking place on the International level within the ESN Network. Her enthusiastic and inspiring report played a significant role in the creation of a foundation for the team’s future mission. During these three very intensive days of discussion groups, strategic planning and workshops, the team presented their individual areas of expertise and what they had achieved up to that date. It all played together very well and had a positive impact on the existing ideas, thus leading to the brainstorming of new points of view regarding the ESNcard’s value. The team agreed and disagreed, produced and amended plans, until the best solution was found. The days were long, but led to great results and innovative ways in which sections could improve the perception of the ESNcard. For example, more value could be added to the membership card if the offers it provided were better advertised and secured for a longer period of time.

As this was the first ever meeting of a team dedicated to this sole objective, everything had to be tailored to match the needs of all of our sections. Gerald, who has had several years’ of professional working experience in Sales and Marketing before attending University, contributed with knowledge and insights about the business world. This helped the team to better understand this dimension and create a guide of how to approach both potential and existing partners. The team surrounding Leonid developed information packs, template emails and fact sheets, which will be used on a local and national level to support and explain to potential partners why agreeing on a partnership with the Erasmus Student Network United Kingdom can prove to be of great benefit to their business. The same applies for any highly motivated section that wishes to look for new local partners to cater for their student population’s needs.

It is important for every ESN UK member to understand that the primary objective of the Partnership team is to support them in their daily consumption and advise them on how to save money while taking advantage of the discounted access to products, services or events, which comes with the purchase of their ESNcard.

Finally, on Sunday the 14th of December, all the parts of the project created over the weekend were put together and analysed as a whole. This operation provided the team with a promising plan designed to ensure that the ESNcard would have a bright future in the United Kingdom. Believe it or not, in three days there was only time for one single short coffee break and no lunch. The nights were not Erasmus-crazy, as everyone was really exhausted and wanted to prepare for the next day’s discussions.

All in all, this meeting has been a great occasion for the newly created Partnership Team to test both their limits and the ones of the ESN crew. They all discovered that this network not only offers great possibilities to its members on a local level, but also gives great opportunities to students who want to go the extra mile and become involved with it at a national level. ESN allows people to find their right place and start developing new approaches to what they like doing in order for the others to benefit from this process as well. Last, but not least, ESN brings people together from all of its local sections and encourages them to pursue their ultimate common passion: supporting the mobility of students throughout Europe while always placing the benefits of the wide public of ESN members above their own.

Thank you for this amazing opportunity and may we continue to do great things together. #THISisESN