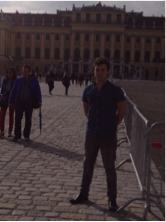 From the 16th to the 18th of October 2014 I was lucky enough to attend the annual NECE (Networking and Citizen Education) Conference in the capital city of Austria, Vienna. The focus of the conference was around the developments in citizenship in Europe in the recent years, with an emphasis on how far Europe has come in the past century since the First World War.

Erasmus and the notions surrounding student mobility naturally played a large role in the development of citizenship in the past 25 years. Consequently, as the Education Officer of ESN UK, I was given a place on the Erasmus+ workshop led by the governmental department in charge of the project in Austria. To my surprise, the conference kicked off in an interesting fashion, namely with a Viennese waltz lesson. It was definitely an odd experience waltzing around a room with members of governments, lawyers and high ranking members of educational organisations!

After an evening of exploring the city the conference started bright and early the next morning with an address from the Austrian Federal President, Heinz Fischer. It was an honour to hear the President speak in depth about the progress of Europe and commend the hard work of those at the conference in forwarding European ideals. The speech was followed up by a talk by the former President of the Austrian Constitutional Court, Professor Dr. Ludwig Adamovich, who spoke of the legal context of the social developments of Europe, which was particularly interesting for me!

It was then time for the workshop, educational stakeholders and interested parties from all over Europe assembled to discuss Erasmus+ and the benefits it will bring to the existing Erasmus structure and European mobility as a whole.  I was asked to address the group briefly and spoke about the varied contexts of a diverse Erasmus programme in a multicultural Europe. This led to an interesting discussion about the ramifications of Erasmus+ across Europe. The workshop ended with participants sharing experiences of the existing Erasmus programme and speculating as to how the Erasmus+ can build upon this.

The workshop was a great insight into differing European perspectives on social mobility and it was widely agreed that Erasmus+ is probably the greatest advent in educational mobility since the inception of the Erasmus scheme. This was discussed further in a keynote speech from Jan-Werner Müller, an academic from Princeton University in the United States. He spoke on issues such as the rising anti-European rhetoric and the challenges the “European Dream” faces in the coming decade. Furthermore, it was noted that one of the beacons for Europe is the current generation, our generation, which has been brought up under the ideals of free movement. We are the representative of the first generation which has a concrete concept of what it is to be European, not just British, or French or Austrian.

Upon leaving the conference and the beautiful city of Vienna just a few short days later, I departed in the renewed knowledge that although, especially in the UK, there is a viable threat to the communal idea of Europe, there are a wealth of positives, both past and present, to build upon and work with.